Guardians of the Galaxy Review

Guardians of the Galaxy 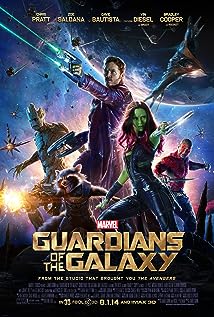 Well I saw Guardians of the Galaxy and I think it’s an OK movie.  Nothing special or as good as past Marvel movies (Iron Man, Thor, Avengers) but it’s OK a bit bland and feels longer than its two hour running time.   I lay that at the feet of James Gunn.  I think that his plodding, boring script that didn’t allow anyone to really shine is the major issue I have with the latest Marvel tent pole movie.  They had so many stars that all wanted to have their big moment that they weren’t able to flesh out the main characters enough to make me care or event maintain my attention.  I found it so dull that my mind wandered a few times since the fight scenes were too dark and muddled (for some reason he didn’t come in close enough to see everything) to see the short blasts of action.  I’m not sure why Chris Pratt got the nod to be the latest hero but in this film he’s just not cocky enough to play a rebel with a heart of gold.  He’s just a bit ‘ehh’ you know he’s attractive but not TOO attractive, just a tiny bit of a bad boy and no real sex appeal so the running joke of his being an alien ladies’ man fell flat for me.  I’m not saying he’s not attractive it’s just that when you’re carrying a big movie like this you have to be distinct and he just blends into the background.   Even more frustrating is the villain … urghh Ronan what a dull bad guy.  The opening sequence was the best scene he had and so I thought maybe he’d do OK.  You know super over the top evil but instead yak yak yak!!! I mean literally talking everyone to death before putting them out of their misery.  I don’t know about you but think the strong evil silent type should be used more often.  WHY must you explain your nefarious plans in such detail?   Just destroy everyone and be done with it .. you want to destroy a planet!  Get to smashing boy!    Nebula … ahhh nebula your daddy issues bored me and Karen Gillian was not scary in this part.  It might have been improved if she could do angry smoldering fury but she can’t.  Just looking constipated doesn’t make a good villain sidekick! Now if you want to see a villain done right in the movie look no further than Yondu Udunta!  Now that’s a prime example of someone who can fill a screen!  Michael Rooker stole every shot he was in since he knows how to play a bad guy!! Even his knife weapon thing was major badass and his constant reminder that ‘he didn’t eat him’ is the perfect blend of humor with a threatening scary undercurrent that I love in a anti hero.  Despite the limited screen time and lines as the film progressed I ‘got him’.  He’s evil but has a softspot .. got it!  I was surprised that Vin Diesel’s Groot was really good.  The overall look and the fact that he was able to put more emotion in the same three words just showed how weak the rest of the cast is in the movie.  I’m sorry but despite all of their talents and overall look of the movie (video game looking) they weren’t able to rise above the plodding screen play and they just seemed to be chilling as they collect a huge paycheck!   So if you’re in the mood to see a comic book superhero movie than here you go it’s the only game in town!  But if you want to see something good … ehh wait to see this your tv at home with blueray/dvd/streaming and if you must see it in the theater don’t waste your time on 3D it didn’t add texture or enrich the movie at all!

From Marvel, the studio that brought you the global blockbuster franchises of Iron Man, Thor, Captain America and The Avengers, comes a new team-the Guardians of the Galaxy. An action-packed, epic space adventure, Marvel’s “Guardians of the Galaxy” expands the Marvel Cinematic Universe into the cosmos, where brash adventurer Peter Quill finds himself the object of an unrelenting bounty hunt after stealing a mysterious orb coveted by Ronan, a powerful villain with ambitions that threaten the entire universe. To evade the ever-persistent Ronan, Quill is forced into an uneasy truce with a quartet of disparate misfits-Rocket, a gun-toting raccoon, Groot, a tree-like humanoid, the deadly and enigmatic Gamora and the revenge-driven Drax the Destroyer. But when Quill discovers the true power of the orb and the menace it poses to the cosmos, he must do his best to rally his ragtag rivals for a last, desperate stand-with the galaxy’s fate in the balance.