The Paley Center’s DocPitch Competition offers a $5,000 grant from A&E IndieFilms for an unfinished or work-in-progress documentary from an emerging filmmaker (someone with two or less credits for directing feature documentary films, whether or not those films have been released). 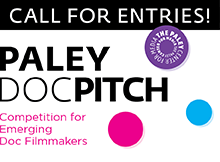 The Paley Center for Media is using this contest, now in its thirteenth year, to choose up to five finalists who will pitch their unfinished films to a panel of experts and producers in front of an audience. This event, the Paley DocPitch Competition, will take place on Wednesday, November 9, 2016, in New York. (There will be tickets for the public to attend this event. Details to be announced.)

To enter this competition, you must submit no more than ten minutes of footage from an UNFINISHED or WORK-IN-PROGRESS feature-length documentary that you hope to pitch to our panel. You must also send in a printed and filled-out entry form (below).

We will judge entries based on the originality of your vision and the viability of the concept. At the pitch workshop, finalists will be judged by originality, viability, and the persuasiveness of their pitch to our panel of expert judges.

Entries must be postmarked by deadline. Deadlines and fees are as follows:

There Are Two Ways to Submit Your Entry:

1) We accept entries through Withoutabox.

2) To submit on your own, download the following PDF forms.

Then print out, sign, and mail a complete and fully executed copy of the Entry Form & Submission Agreement, along with your DVD, submission materials, and a check for your entry fee made out to The Paley Center for Media to:

Pitch Workshop
c/o The Paley Center for Media
9th Floor
25 West 52 Street
New York, NY 10019
PREVIOUS WINNERS
2015: Memories of a Penitent Heart directed by Cecilia Aldarondo
2014: The Pregnancy Exclusion directed by Rebecca Haimowitz
2013: The Age of Love directed by Steven Loring
2012: Eleven directed by Laura Paglin and Kahlil Pedizisai
2011: The View from Bellas Luces directed by Christa Boarini
2010: Charge directed by Mike Plunkett
2009: The Iran Job directed by Till Schauder
2008: Circo directed by Aaron Schock
2007: The House that Herman Built directed by Angad Bhalla
2006: Whatever it Takes directed by Christopher Wong
2005: Asparagus! (A Stalk-umentary) directed by Anne de Mare and Kirsten Kelly
Withoutabox logos are trademarks of Withoutabox, a DBA of IMDb.com Inc. or its affiliates.