video game series. Of course a few of you might remember the Hitman movie that came out in 2007 starring Timothy Olyphant which I enjoyed. Look at Tim he’s a cutie even when he’s bald!

The new film has the latest clone and he’s major scary bad ass from the first look on youtube and it’s a blast. From a sexy fire engine red Audi to a sexy chick (for the guys/gals) and a bunch of clones for the rest of us. It looks like it’s going to be a live action spy video game and if it matches up to the ads I’ll be one happy fangirl! I’ve played the game a few times and it’s a fun shooter. Well designed with a story that you can easily follow rather your playing the latest or original game. Check out the link to the trailer on YouTube with a electric remix of Jimi Hendrix’s Voodoo Child and stars Homeland star Rupert Friend who’s in custody by the Homeland Security (or the police or some other gov’t agency). It immediately kicks off with a major escape sequence with the cats realizing they are the prey! 47 saunters like a BOSS in uniform and we next see him speeding down the street in a sexy red Audi that is impelled by hooks and than he fights off paratroopers. more soldiers, a helicopter crashing into a building, and him beating somebody with a plane .. a PLANE propellor/wing thing (WTF). The action in this film is off the hook crazy! Now I could have sworn that the film was coming out in February but it looks like it’s been pushed back to August. Now I wonder if it’s because they added more action scenes, thought it was too good for February and was worthy of a fall release. Well we’ll find out when it’s in theaters this fall. Are you looking forward to the newest video game inspired action movie? 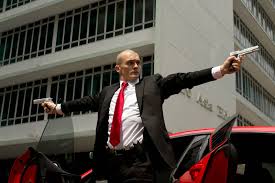 HITMAN: AGENT 47 centers on an elite assassin who was genetically engineered from conception to be the perfect killing machine, and is known only by the last two digits on the barcode tattooed on the back of his neck. He is the culmination of decades of research – and forty-six earlier Agent clones — endowing him with unprecedented strength, speed, stamina and intelligence. His latest target is a mega-corporation that plans to unlock the secret of Agent 47’s past to create an army of killers whose powers surpass even his own. Teaming up with a young woman who may hold the secret to overcoming their powerful and clandestine enemies, 47 confronts stunning revelations about his own origins and squares off in an epic battle with his deadliest foe.