Guillermo del Toro had me at GIANT ROBOTS & MONSTERS!!  When I first saw the posters for this movie at Comic Con last year it sparked my curiosity and had wanted to attend the panel but it was impossible to get into .. boo hoo SDCC is CRAZY packed!  But once it got on my horizon I’ve been keeping up on the film.  One of the things that has me excited is that it’s not computer generated F/X instead he’s made large scale models since I’m getting overloaded on all the computer animated special effects.  To me (when done badly) they look like video games and I think video game animation is great but I don’t want to see them on the big screen.  Usually when the F/X isn’t done well it takes me out of the film and distracts me from the story since I start thinking why it looks so bad and ‘didn’t anyone NOTICE’ the badly done work??

I know all of you are counting down the days to see the fight fest with an all star great cast! 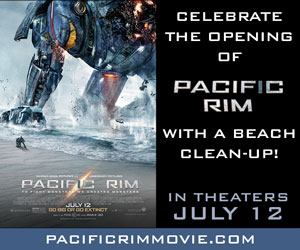 To promote the July 12th release of Pacific Rim, Giant Robot and Campus Circle invite you to enter to win a prize pack for Pacific Rim and a gift certificate to Giant Robot.

What is Pacific Rim about?
When legions of monstrous creatures, known as Kaiju, started rising from the sea, a war began that would take millions of lives and consume humanity’s resources for years on end. To combat the giant Kaiju, a special type of weapon was devised: massive robots, called Jaegers, which are controlled simultaneously by two pilots whose minds are locked in a neural bridge. But even the Jaegers are proving nearly defenseless in the face of the relentless Kaiju. On the verge of defeat, the forces defending mankind have no choice but to turn to two unlikely heroes—a washed up former pilot (Charlie Hunnam) and an untested trainee (Rinko Kikuchi)—who are teamed to drive a legendary but seemingly obsolete Jaeger from the past. Together, they stand as mankind’s last hope against the mounting apocalypse. From acclaimed filmmaker Guillermo del Toro.
Official Website
Giant Robot Website
Watch the Trailer