I do love a good Fairy Horror Tale 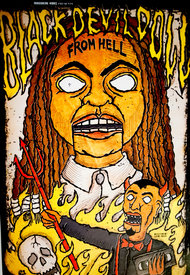 I had to share this fascinating story of Chester Novell Turner who filmed his own horror films to … well no acclaim back in the 80s but was discovered by horror fans who wanted to see something new.  Well they got new, scary and well BLACK with Chester’s twisted horror films.  After reading this story in the NYT now I want to see Black Devil Doll and his other that alas are still on VHS but will hopefully be transferred to DVD or streamed online so that I can get a little scared in the comfort of my own apartment.  It just goes to show that everyone has a story and SOMEBODY wants to hear that story!

Chester Novell Turner and ‘Black Devil Doll’ Are Back 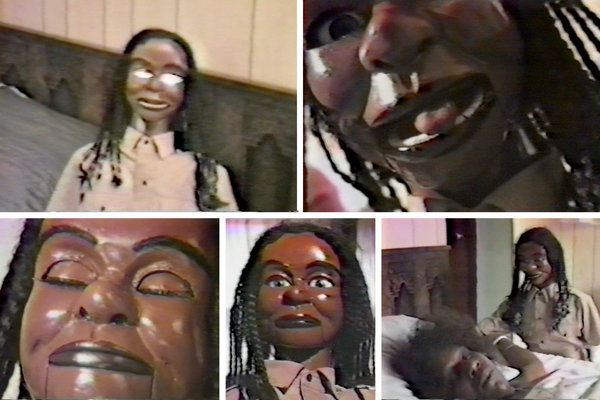 In the 1980s, when the home-video revolution turned backyard directors into VHS auteurs, Chester Novell Turner lived his childhood dream of making horror movies. He bought a video camera, borrowed money from his mother and enlisted the help of buddies, a girlfriend and a preacher to make two ultra-low-budget movies that looked as if they were shot in a basement, because, in some cases, they were. “Black Devil Doll From Hell” was about a kindly woman who is raped by a ventriloquist’s dummy; “Tales From the Quadead Zone” was a trilogy of shorts that featured a killer clown and the ghost of a dead child. As word slowly spread about Mr. Turner’s gritty movies with African-American casts — a rarity in the very white horror world — bootleg copies of his films spread like crazy along the VHS underground. 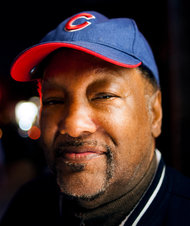 Chester Novell Turner, who briefly made horror movies in the 1980s, at the screening of his “Black Devil Doll from Hell” at the Nitehawk Theater in Williamsburg, Brooklyn.

A limited-edition poster designed by Earl Kessler Jr. for the screening this month.

Then he stopped. Although Mr. Turner told a newspaper in the late 1980s that he was at work on another film, it never materialized. In 1996, rumors surfaced that he had been killed in a horrifying car accident. Grief spread among his devotees, who by now were sharing the Gospel of Chester on the Internet. Although, by then, DVDs had started to replace VHS as the home entertainment option of choice, Mr. Turner’s films became some of the most prized VHS horror titles among fans who treasured the low-fi beauty of a chunky plastic box of tape.

As his renown among indie horror connoisseurs grew, mysteries remained: Why would he make a sinister psychosexual movie like “Black Devil Doll”? How did he come to make his leading character a working-class black woman, an unheard-of protagonist in the horror genre? Just who was this Roman Polanski of the South Side of Chicago?

Fast forward to 2013: a spry and alive Mr. Turner, 67, learns to his surprise that he is a niche horror star who is being cheered by fans at sold-out screenings across the country and is the subject of a new DVD boxed set.

“The reason we’re watching this film 25 years later is that you can tell Chester didn’t make it because he thought it would get him to Hollywood,” said Bryan Connolly, who manages a Vulcan Video store in Austin, Tex. “You can tell he had some weird ideas in his brain, and he had to get them out by any means necessary. Whether or not you think his films are trash, his drive is what a true artist’s drive is.”

Just after midnight on a recent Saturday at Nitehawk Cinema, a theater in Williamsburg, Brooklyn, mouths were agape during a screening of “Black Devil Doll From Hell” (1984). Filmed in a church, bar and other locations in Chicago, the bizarre sexual tale features Shirley L. Jones, who became Mr. Turner’s girlfriend, as a woman who undergoes a troubled sexual awakening after being assaulted by a dummy that looks like Rick James. The film is slow moving, crudely edited and has a low-budget look that comes from the VHS tape it was shot on.

John Woods, Nitehawk’s programing director, stocked “Black Devil Doll” at a video store he once owned, and he said he would tell customers: “Be prepared. It’s a crazy movie. It’s something you’re not going to forget, whether you love it or hate it.”

Mr. Turner’s mystique hit a zenith a few years ago, when an eBay auction of an original VHS copy of “Tales From the Quadead Zone” sold for nearly $700. The winner was Earl Kessler Jr., an illustrator who later designed a poster for the Nitehawk event. This year Mr. Kessler sold the video to another collector for over $1,300.

Enter Louis Justin, the 23-year-old owner of Massacre Video, a horror micro-label he runs out of his Michigan home. An avid collector of VHS, Mr. Justin turned amateur gumshoe to track down a director he calls a legend. After hundreds of fruitless calls to Chester Turners across the country, Mr. Justin was at a Chicago video store when he asked the owners if they’d heard of “Black Devil Doll.”

“They said, ‘Oh yeah, some kid stole that tape from us years ago,’ ” Mr. Justin recalled.

He called a Chester Turner who lived several blocks from the store. This Chester Turner, when asked if he was the director of “Quadead,” replied: “Yeah. Why do you want to know about that?”

Mr. Justin said: “I explained I was a giant fan of his films and said I would be honored to work out a deal and release them back into the public. His reply was, ‘Yeah that would be a lot of fun.’ ”

Mr. Turner, originally from the West Side of Chicago, said moviemaking was a side passion he developed as a child who devoured Hitchcock films and “The Twilight Zone.”

“I love the strange and the bizarre,” he said during an interview before the Nitehawk screening. “I had a twisted sense of humor.”

After taking a correspondence course on filmmaking basics, he shot “Black Devil Doll” with about $10,000.

“All my friends would say: ‘Who does he think he is? Steven Spielberg?’ ” Mr. Turner said. “But I said I’m going to do this because this story is worth telling.”

Mr. Turner self-released “Quadead” but sold “Black Devil Doll” to a distributor, who, he said, stiffed him. After that experience soured him on independent filmmaking, he focused on his home remodeling business.

Filmmaking “was a part of me that was left unfulfilled,” he said. “But there were other practical things that had to be taken care of,” like raising several children. (His wife died several years ago.)

Mr. Turner’s Brooklyn appearance was the last stop on a cross-country tour that commenced at the Cinema Wasteland horror movie convention in suburban Cleveland in October and continued in Los Angeles; Austin, Tex.; and Philadelphia. Far from looking like the creator of a demon doll, the director speaks quietly, with soft eyes and a wide, warm smile that delivers a hearty high-pitched laugh.

“People came up and shook my hand, and they were so sincere,” Mr. Turner said. “I’m amazed that people have that kind of feeling for something I did a long time ago.”

His re-emergence mirrors stories in recent documentaries about minority artists unaware of their acclaim among mostly white fans. Think of Sixto Rodriguez, the reclusive Hispanic musician in the Oscar-winning “Searching for Sugar Man,” or the three black brothers in a ‘70s rock group at the center of “A Band Called Death.” Like those artists, Mr. Turner turned the tables on racial conventions, in this case for horror movies, by casting black actors and shooting in black neighborhoods in Chicago and Alabama, where Ms. Jones was visiting relatives. His fans, however, have been the bread and butter of the modern horror genre: white and young.

Lars Nilsen, a programmer for the Austin Film Society, said he was initially concerned there was a “condescending hipster racism thing” in Mr. Turner’s following. “But I didn’t detect it at all” at his organization’s screening of “Black Devil Doll” with Mr. Turner and Ms. Jones, he said. “I think the fact that he’s black in a world that’s primarily white adds to the underdog thing. He’s a complete outsider in so many ways.”

Mr. Turner’s influence reaches beyond the horror set: Last year the Museum of Arts and Design showed “Tales From the Quadead Zone” as part of its VHS retrospective. Jake Yuzna, curator of the show, said Mr. Turner stood apart from other amateur filmmakers because his films “failed in a way that made them more original and fantastic.”

“If you watch the films, you can’t imagine there’s anyone else out there like him,” Mr. Yuzna added. “Like any auteur we talk about, like John Waters or Melvin van Peebles, these films are uniquely his. If you gave him a camera today, you’d know it’s his film.”

At a table in the Nitehawk lobby, Mr. Justin was doing a brisk business in DVDs and other merchandise. Later this year, the label Poisoned Mind Records plans to release a vinyl version of the “Black Devil Doll” soundtrack, which includes Mr. Turner’s own minimalist score (think of Kraftwerk with an R&B swagger) and original songs. Mr. Justin declined to go into detail about his contract with Mr. Turner, other than to say that he paid Mr. Turner for the rights to his two films, which is more “than what he made originally.”

“He’s been treated well,” Mr. Justin said of his deal with Mr. Turner. (“I trust him,” Mr. Turner said in a separate interview.)

Will Mr. Turner return to directing? He has several screenplays at the ready, including “Tales From the Quadead Zone 2” and a film about an afterbirth that comes to life.

“I haven’t reached a masterpiece yet,” he said.