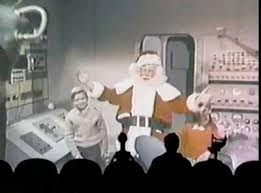 I’m sure you’ve been missing Mystery Science Theater 3000 for the past few years so I’m very excited to have gotten an interview from the trio.  They are now  RiffTrax and Michael J. Nelson, Kevin Murphy and Bill Corbett are keeping busy with Fathom events this past  Halloween and now they are back for Christmas!!

NCM Fathom Events & IGN had a special night on December 5th with the classic holiday movie ‘Santa Claus Conquers the Martians‘ because really NOTHING says Hanukkah & Christmas like Martians!  Michael, Kevin and Bill brought their humor to the big screen but if you missed the special at a local theatre near you I got the chance to have a Q&A with the guys.

Hopefully we’ll have more hilarious movie nights with the guys may I suggest Valentines????  My ‘Bloody Valentine’ is the perfect movie for the terminally single to mock for our enjoyment!  I’ll bring the heart shaped cake with a pickax in the center!

What makes a great holiday movie?

Mike:  It should have at least one man berating his daughter’s teacher and then moments later getting punched in the face by the teacher’s husband while getting hammered at a local bar.

What films make up your ‘to watch list’ for holiday movies?

Bill: Roughly 50-70% of the existing versions of A CHRISTMAS CAROL (notably: Alistair Sims; Mr. Magoo), and Laurel and Hardy’s MARCH OF THE WOODEN SOLDIERS.  Plus the movie that Mike describes so well, above (DIE HARD).

Do you miss the show?

Kevin: I miss making the show, because it was a ton of fun to make.  And now with Rifftrax, I still get to have that kind of fun, only without puppets.

How did you and Fathom decide to work on this holiday special?

Mike:  Well, we loved doing “Night of the Living Dead” for Halloween but there’s a grimness to that that needed to be erased with the sheer, colorful joy of Santa Claus Conquers and its bottomlessly awful stupidity.

Bill: Yes!  We WILL definitely be doing more of these Fathom live events, but we don’t have any titles set for 2014 yet.  I’m hoping we get the chance to finally riff the entire ouevre of Ingmar Bergman.  In one night.  The kids today, they love stuff like that!

What is your must see movie for New Years?

Kevin: “Meet John Doe,” “Radio Days” and “The Hudsucker Proxy.” you MUST SEE THEM.  it’s the law.

If you’re trapped on a desert island what three movies would you bring and why?

Mike:  Transformers, because if I could somehow make a DVD player and TV out of coconuts and flotsam I could show it to animals and it would kill them — obviously — and I could sustain myself. Also, I’d bring the Gilligan’s Island TV movie so that if any ironic hipsters also washed ashore they would appreciate my sly sense of humor. And finally, I’d bring my beloved Criterion Edition of “Casablanca”. Which I would sharpen on a stone and use to hunt lizards.

Do you prefer modern stadium seating or the old fashioned theaters?

Bill: I don’t have a strong preference, especially now that people in front of you generally don’t wear titanic hats like they did back in the dark days when Bugs Bunny had to ask that woman to remove her chapeau.  We live in a golden age of sitting.

What is the most annoying thing someone did while you’re watching a movie?

Kevin:  Once a fella threw up on me, another time a fella tried to sit on my head.

Mike:  The perfect movie watching snack is nothing. Nothing at all. People who eat in theaters should be publicly flogged. On Christmas.