Well am so happy that the mid season premier has kicked off in the Framework since it’s one of the best episodes ever! So if you haven’t seen the new episode on ABC please stop reading cause this if FULL of spoilers. 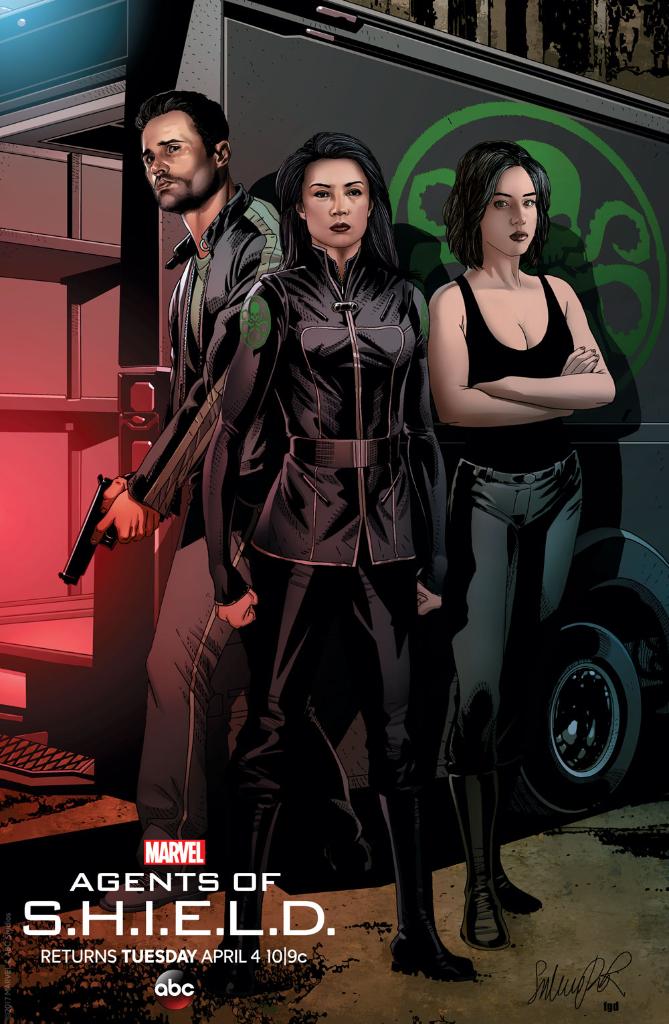 My recap well in the Framework Hydra won and they have taken over the world with an iron fist and boots upside everyone’s necks. Pretty much everyone is either working for them, fearing them or trying to hide that they are inhuman since in this world it’s pretty much a death sentence. They have the technology to test genetic markers and will take you away to torture, experiment or do goodness know what to inhumans so it’s one scary place to be different. Daisy is an agent so uses her access to look up friends and Lincoln (sadly he’s dead after an experiment so no useful power help) so that she can try to ‘wake’ them up. Jemma Simmons isn’t so lucky cause she wakes up buried in the woods all dirty with smoky marks on her chest. Jemma is able to flag down a passing car when another woman picks her up (likely thinking she was attacked by a rapist) who is willing to take her to WDC till they get to a Hydra checkpoint and realizes she has no Hydra ID. Instead she’s S.H.I.E.L.D. and tells her to get out before the wrath of Hydra rains down on them like hellfire (no new friends).

Jemma is mildly curious about the how realistic it seems and is intellectually curious how the system is working (who can blame her). Next we Coulson teaching at a high school spouting Hydra propaganda till one kid is escorted out and for one moment I though the would do something but he just told him to grab his book bag. Another kid says that Hydra was founded by Nazi scientists and is evil as heck but Coulson is keeping his neck down so tells the kid he’s wrong but (at least) doesn’t report him. Instead he uses an example of an inhuman being brought back from Behrain and put in ‘normal’ school but he kills everyone kicking off this witch hunt. A memory that even in this perfect world is hunting Melinda May as she leads a Hydra (looks like she’s 3rd in command) team including Ward & Daisy who she directs to question an inhuman prisoner. May is ruthless as usual but with no tempering so she’s not one to play with in the Framework! During the presentation Daisy recognizes the prisoner ‘Jason Rojan’ but doesn’t out him (it’s Vijay Nadeer) as she’s directed to turture him with Ward to get necessary information about the resistance. May is watching them like a hawk and when Daisy stumbles is reminded to do her dang job and torture inhumans for intelligence. May comes in pissed that Ward and Daisy are failing and Vijay talks some major smack about Bahrain almost earning a bullet to the brain till Daisy talks her down. Daisy is told to turn him over to the ‘Doctor’ for enhanced interrogation and while escorting him tries to get some info on the down low  but he tries to escape sadly straight into the arms of some the Doctor’s goons. Was I the only one shocked to see Fitz as the evil doctor looking quite fetching in a tailored three piece black suit?? Why does evil always look so damned sexy?? Am sure he REALLY wished he’s given up the info to Daisy and Ward cause the Doctor is brutal with that machine he was using . Jemma tries to meet Daisy at the rendezvous point but since she was nowhere to be found she marked ‘X’ as the spot and looked for Coulson in the Hydra cop car’s computer. Off to the school she went (how nobody put out an APB is beyond me but ) to try to wake him up. She’s all hysterical so comes off as a lunatic and he thinks it’s some sort of a test so he calls the po po aka Hydra to inform even after she points out the T.A.H.I.T.I. Hula Doll and asks him to think 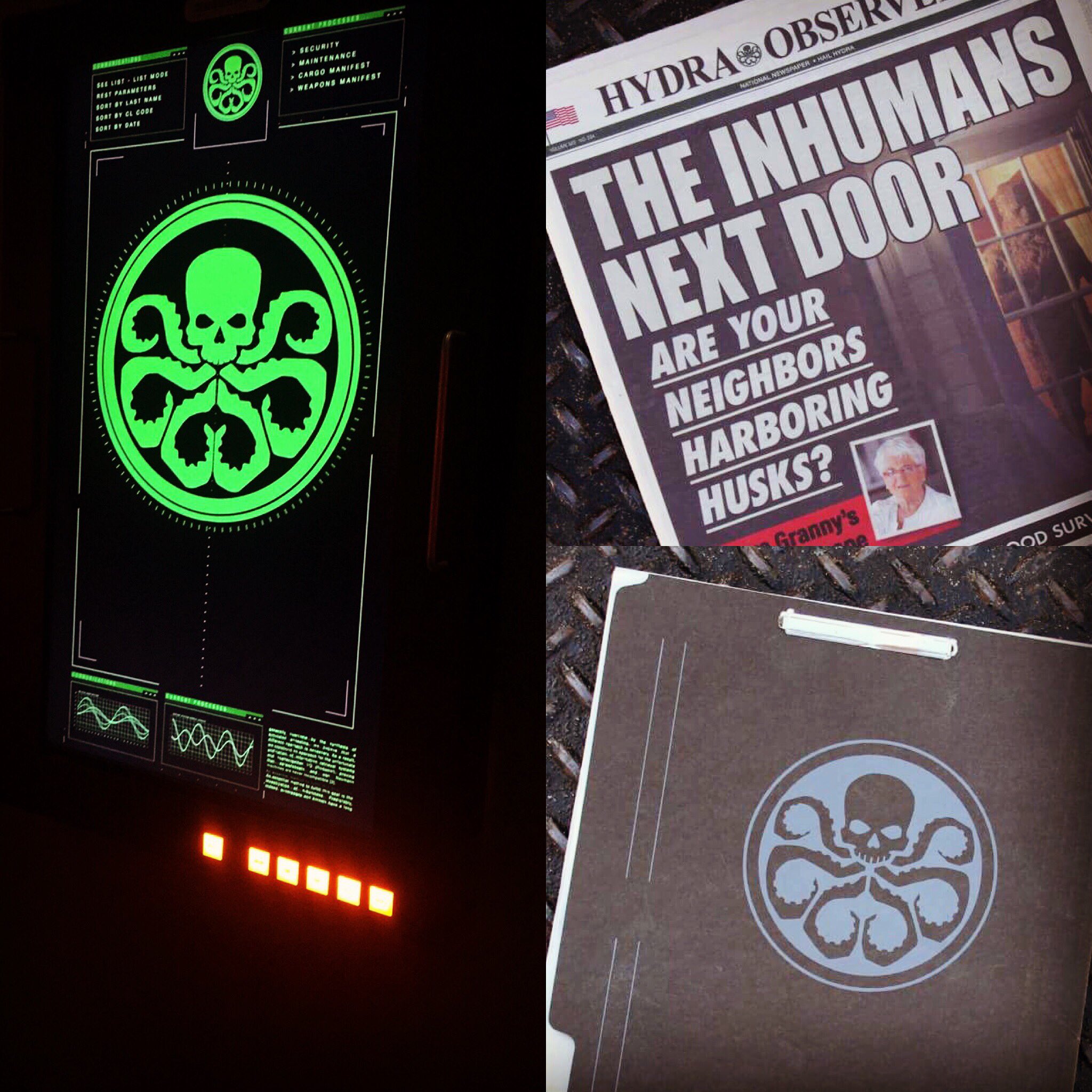 about moments when something doesn’t seem right but in Coulson’s defense she still looked crazy as heck! On her way out the rebellious kid is spray painting the Hydra car like an idiot WANTING to be caught after talking for a few minutes give her his car (would love to be at his parent’s house to hear THAT explanation!) but she needed a car so …

Daisy is on her way out of the Doctor’s toruture room when May walks into to tell him about the report of a subversive female at Coulson’s school and he reminds her of her past failure as he says get the team out and find this person. The Framework seems to have little glitches since he kinda has a twinge about Jemma but doesn’t know why but off he goes to report everything to the boss. It’s A.I.D.A. and she has Fitz wrapped around her finger sealed with a kiss. Nope I didn’t see that coming either!

Daisy and Jemma try to use the ‘wake up’ remote but A.I.D.A. closed that loophole and they are trapped like rats in a maze! Daisy heads over to Coulson’s school to see if she can reason with him after he leaves the classroom after perusing newspaper clippings to try to figure out what is going on. Since Daisy has ALWAYS been his favorite he wakes up almost the moment she speaks and they lock eyes in the rearview mirror. I know that she’s not his kid but I STILL think that’s his kid with May somehow!

I have to say that I’m impressed with this episode and that they are using the graphic novel as a framework so it offers so much more freedom than keeping in the movie timeline. I am excited to learn more about the people in the Framework .. the all Hydra are Nazis kid is my new best friend and am curious where the rest of the team will be found in next week’s episode.

Read below for a little more fangirl writing about my favorite twists from the mid-season premier.

The episode has Daisy walking up beside her man and it’s not the one we expected it’s Ward! Daisy aka Sky wasn’t the only one that shivered since I had no idea how they were going to bring him back but I have to say this third ‘mini series’ has me on the edge of my couch. I was so intrigued that I watched it live and was NOT disappointed. Now Daisy woke up in a gorgeous bedroom sadly Jemma woke up buried in the dirt near the bordered up old S.H.I.E.L.D. offices with dark marks all over her sweater. As the episode goes on and I tried to figure out if she was a zombie (she’s not) and why she wasn’t snuggling up with Fitz it was revealed that she was likely murdered by Hydra (nearly explaining the two smoke marks near her heart). Of course we realized it was a whole new world when she hitchhiked to a checkpoint and showed her new ‘friend’ that she had a S.H.I.E.L.D. ID. The welcome mat was rolled up real fast after that!

We got to see a few of our beloved characters living life in the Framework and it was not what I expected. Mae is high up in Hydra taking names and running her team like a boss. 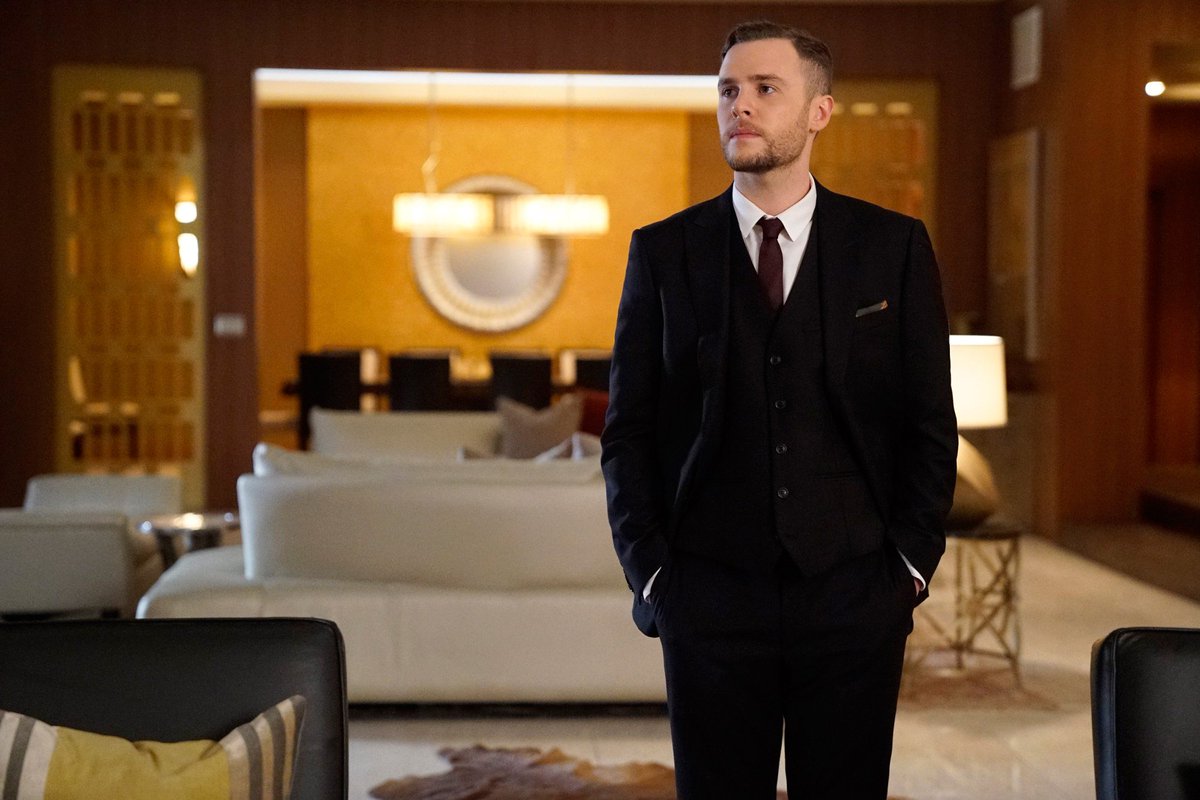 Everyone is fearful of the Doctor (who is NOT the person I thought) nope it’s Fitz looking quite debonaire in a three piece black suit with a black pit where his heart used to be torturing inhumans and enemies of the ‘state’. I was surprised to find Colson having drank the KoolAid teaching high school students propaganda lies and allowing a kid to be taken by the ‘authorities’. I think he may have been an inhuman or maybe part of the resistance but no matter what nothing good was going to happen to that cute little ginger. His buddy tried to push back against Colson saying that Hydra was founded by Nazi Scientists and is the evil empire but he got shut down by ‘teacher rules’ (he’s darned lucky he didn’t get informed on!). 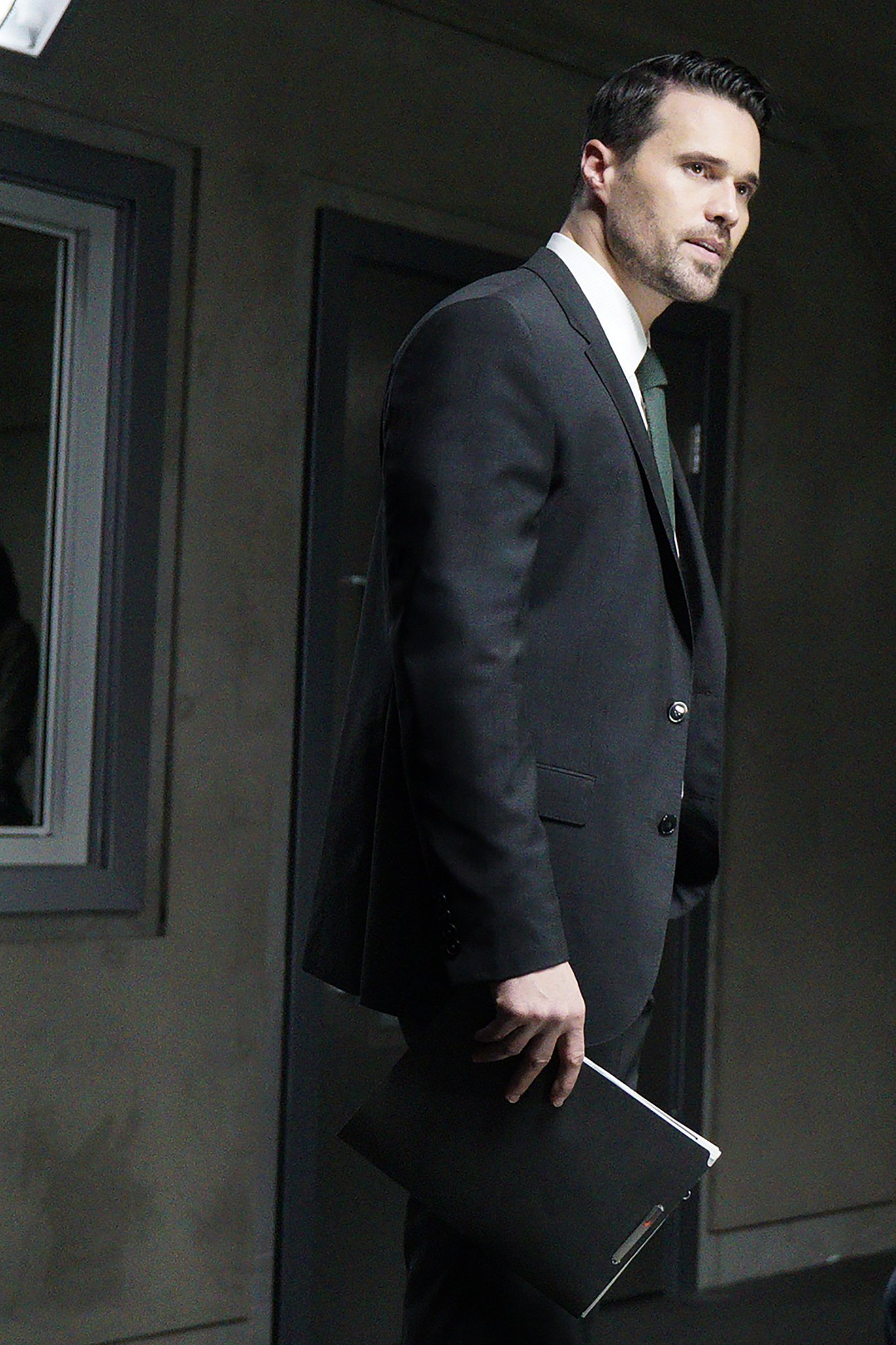 Ward still loves Daisy aka Sky enough to say nope to moving in (a bit of foreshadowing) but since he hid her paperwork showing that she’s a inhumane have forgiven him for being evil .. did I mention he had his shirt off <hubba hubba>. Watching Daisy aka Sky try to navigate Hydra from logging onto the computer, talking smack to co-workers and interrogating a prisoner was interesting since she was not blending all the well and I thought that Mae was going to give her a drug test or ask if she was drunk! Blend girl blend when you are surrounded by Hydra!

I found it fascinating that Jemma didn’t try to blend in by washing up in a bathroom to look more presentable since she looked homeless which of course brought her to the attention of the authorities. So of course everywhere she turned people were giving her the stink-eye they probably thought she was going to ask for some money!

I love Coulson at school trying to keep his head down for fear of being dragged off to be tortured and the saucy kid who was NOT having it with the Hydra propaganda!

Leave a comment below on what was your favorite part about the new world order! 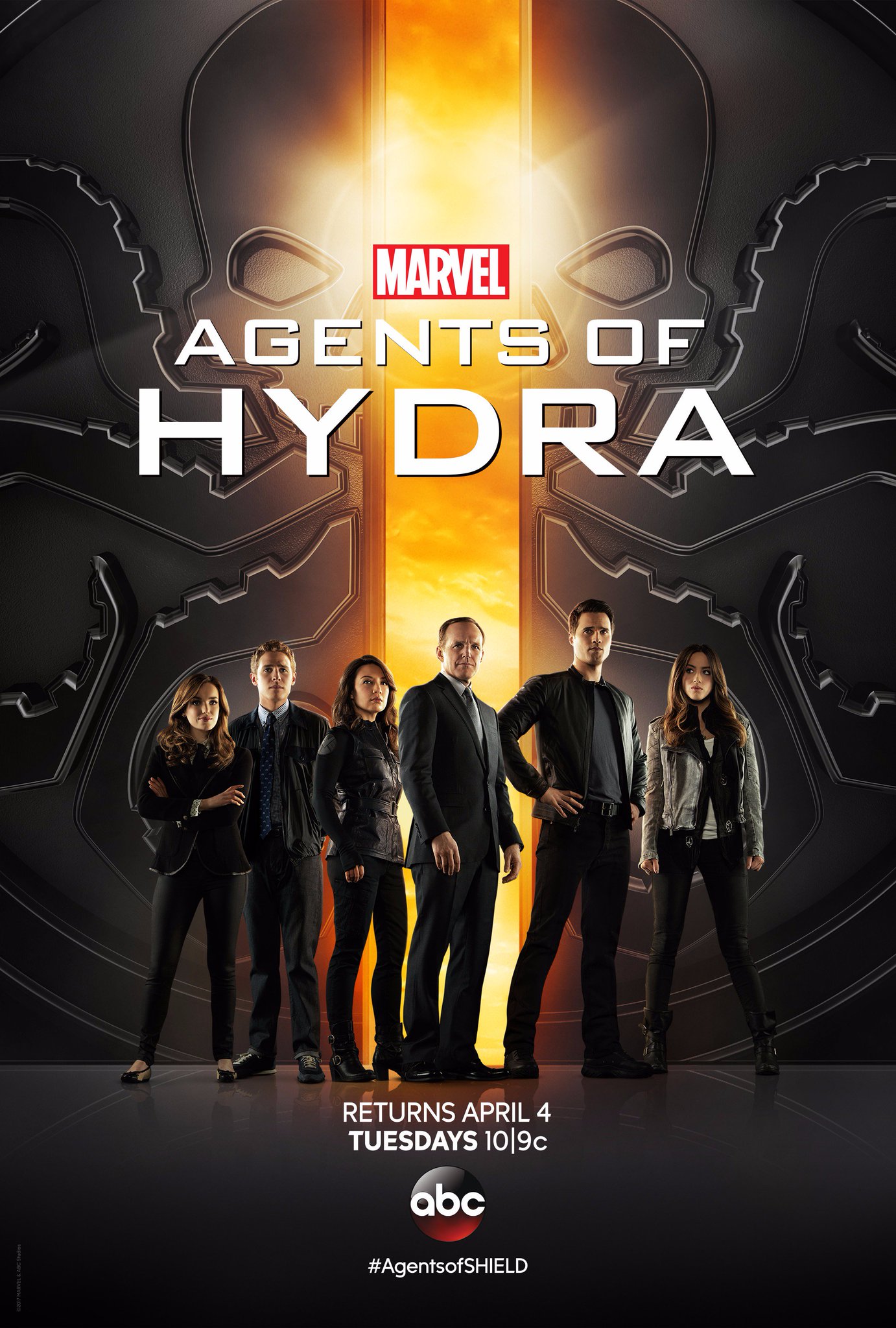