I learned of the camps where American citizens of Japanese descent were sent to during WWII and always thought it was a symptom of American xenophobia where people who don’t ‘look like Americans’ are treated as less human. I know some people think this in the past and it would never happen again but I sadly knew this hatred of other was simply bubbling under the surface. It boiled over after the attack on September 11th (Anti-Muslim) and with the election of President Obama (Black racism) that seemed to make it ‘ok’ to spout racist through a lens of love of ‘America’. Now with Donald Trump running for President the normal dog whistle ‘Southern Strategy’ is no longer whispers but shouts against the ‘other’.

This is why I plan to attend Go for Broke National Education Center’s Defining Courage Exhibition on Saturday, May 28th DTLA (Little Tokyo) with a community festival. This timely exhibition will provoke conversations about the rise of American xenophobia and how the Japanese American experience during WWII might be repeated if Donald Trump is elected with his views on Mexicans and Muslims.

As citizens of conscious let us join the Broke National Education Center and walk in the steps of the Japanese American citizens at the internment camps as well as think that this should never happen again in our country.

Learn more about about the center and the event below.

WWII ended 70 years ago, but we are still facing some of the same issues regarding the rights of citizens, what it means to be an American and most importantly  who is an American.  Issues of Religion, Race & Ethnicity are at the forefront of political discussion.  Underlying this all is the idea of ‘what does an American look like’.  Go For Broke reminds us that we are all Americans, and puts visitors in the shoes of the Japanese Americans, as they were sent to incarceration camps, called to serve in the military (even though they were viewed as the enemy), and in many ways prove that they deserved to be in the country they were either born in or immigrated to.

Go For Broke National Education Center to Debut New Facilities
and Defining Courage Exhibition with  Free Public Opening On May 28, 2016

Go For Broke National Education Center (GFBNEC) will debut its new facilities and groundbreaking Defining Courageexhibition on Saturday, May 28, 2016, with a Ribbon Cutting and Homecoming Festival in the Little Tokyo district of Los Angeles. The Defining Courage exhibition will feature free timed-entry during the Homecoming Festival.   Exhibition admittance is limited and early reservations are recommended. Free tickets are available online beginning on April 8, 2016.  To learn more, or to register for tickets, please visit www.GoForBroke.org.

Located in the former Nishi Hongwanji Buddhist Temple, GFBNEC has a mission to educate and inspire character and equality through the virtue and valor of our World War II American veterans of Japanese ancestry.  This story of courage in the face of discrimination, of equality and the rights of citizenship is inextricably linked to its facilities, the former Temple.

Nishi Hongwanji Temple:  Little Tokyo District, Los Angeles, 1942
Built in 1925, the Nishi Hongwanji Buddhist Temple was once among the largest and most influential Buddhist Temples in the United States.  At the time, Little Tokyo was home to more than 30,000 Japanese Americans.  However, with the beginning of World War II, the community was changed.  In 1942, the neighborhood’s Japanese Americans were forced to leave.  They were assembled outside the Temple, where government buses took them to incarceration camps.

A true community center, the Temple held these displaced families’ belongings until they were able to reclaim them after the war.   After WWII, the Temple reopened and provided shelter to residents who returned from the incarceration camps. The Japanese American World War II story begins at this Temple and places like it.  From this very building, families were displaced in an atmosphere of fear, discrimination, and almost universal prejudice.  But arising from this unjust treatment, 33,000 citizens of Japanese ancestry came forward, as Americans to serve in their country’s military. 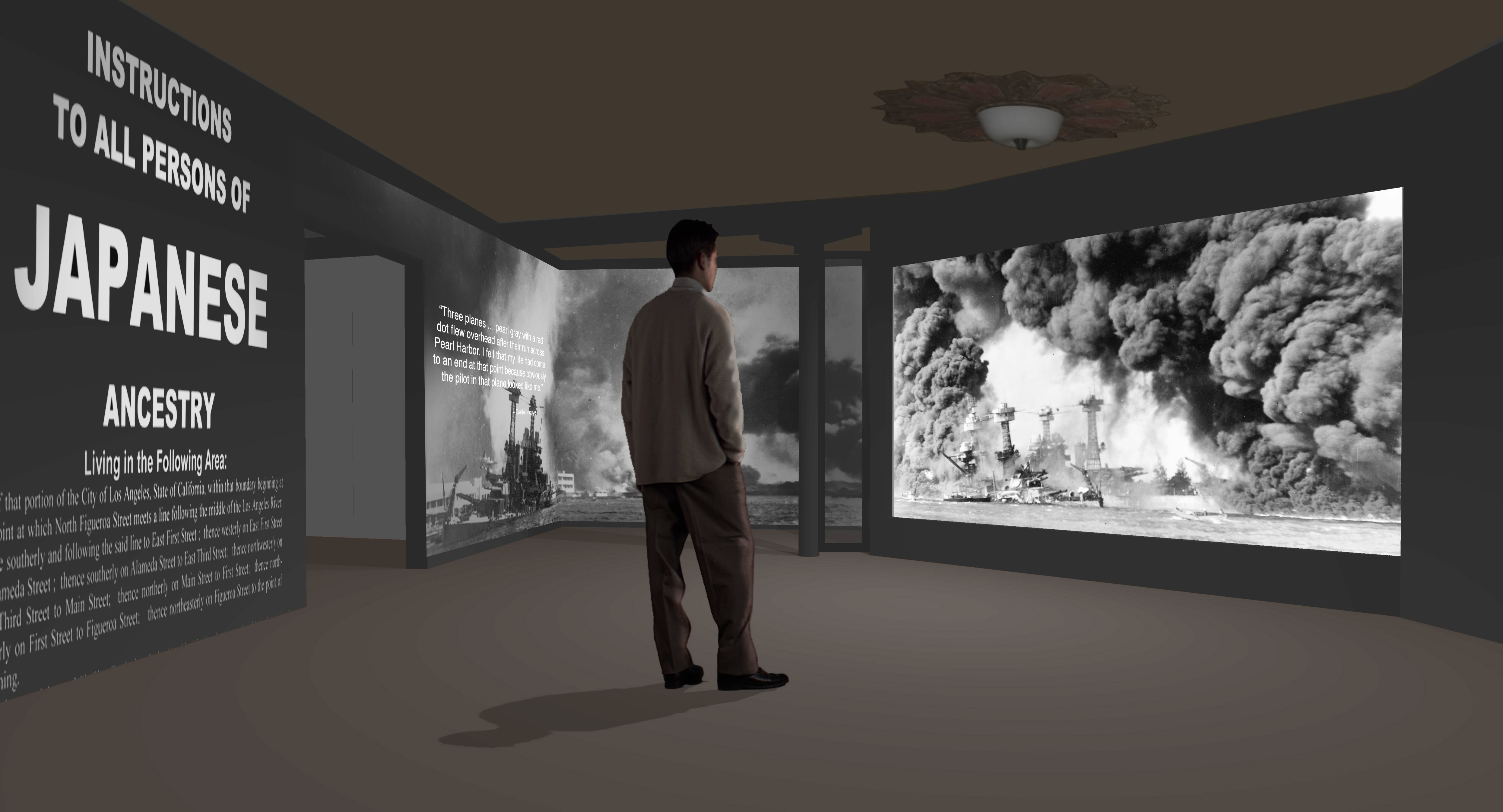 Pearl Harbor changed the lives of all Americans, but one group of citizens was affected beyond compare. Japanese Americans were literally stripped of their rights as citizens, and sent to incarceration camps.  In spite of this, as stated by 100thBattalion veteran Ben Tamashiro and commemorated on the Go For Broke Monument, “Rising to the defense of their country, by the thousands they came – these young Japanese American soldiers from Hawaii, the States, America’s concentration camps – to fight in Europe and the Pacific during World War II. Looked upon with suspicion, set apart and deprived of their constitutional rights, they nevertheless remained steadfast and served with indomitable spirit and uncommon valor, for theirs was a fight to prove loyalty. This legacy will serve as a sobering reminder that never again shall any group be denied liberty and the rights of citizenship.”

The Defining Courage exhibition is divided into eight sections to illustrate the difficult decisions Japanese Americans were forced to make, and prompts visitors to explore what their decisions might be in similar circumstances.

Pearl Harbor Aftermath:
The lives of Japanese Americans changed dramatically during the months immediately following the bombing of Pearl Harbor on December 7, 1941.

Lives Left Behind:
“All of a sudden our friends were not our friends…we weren’t Americans anymore, we were Japs.  Nobody ever used that word before, but we in Hawaii were now considered Japs.  One year we were neighbors, and the next year we were enemies.”–Stanley M. Akita, Hanamuana, HI

Japanese American families on the mainland were forcibly relocated to incarceration camps in accordance with Executive Order 9066. This meant that Japanese Americans had to sell their businesses, and their possessions–often for pennies on the dollar– unless they could find someone who was willing to store them.   Heirlooms, family pets, photographs and friends were almost immediately lost.  Community leaders were taken by the FBI.  Families with relatives in Japan and America were torn apart.  Almost overnight, these Americans lost everything, including their identity as Americans.

History Revisited:
The events of WWII are strikingly relevant today.  In History Revisited, we examine how we can stay safe as a country while simultaneously honoring the Bill of Rights.  The current global climate is bringing the Japanese American experiences of WWII to the fore, again.  Some parallels include the treatment of Arab and Muslim Americans after the events of 9/11; the USA Patriot Act of 2001; nativist rhetoric against immigrants; and the rise of racial profiling.

Piece it Together:
What was it like to be an American one day, and a person of suspicion the next?  Piece it Together is an interactive storytelling component that provides a window into the experiences and emotions of Japanese Americans during WWII.  Visitors begin the journey geographically, selecting a destination.  They are then placed in the shoes of young Japanese Americans during the war.  They are confronted with decisions like “Will you join the military while your family is incarcerated?”; “Will you protest against the government’s unjust treatment?”; “Will you leave your family behind in the incarceration camp to seek education on the East Coast?”  In this computer-based activity, they then make a decision and face the consequences, learning about real-life Japanese Americans who made similar choices during World War II.

Propaganda Deconstructed:
The exhibition warns against propaganda, fear mongering, and the abridgement of constitutional rights.  To illustrate the power of the media and others, Propaganda Deconstructed teaches visitors the methods by which propaganda is spread.  Visitors learn how stories, images, and videos are often edited to change the meaning.  On a large touch-screen, visitors experiment with cropping modern images in order to express differing messages.

Media Maker:
Media Maker lets visitors create their own mini-documentary films about the Japanese American World War II experience and its relevance to today.  This computer-based activity provides visitors an opportunity to create a short film using drag and drop technology.  Visitors draw from a library of hundreds of oral history clips, historic photographs and films, documents, and the personal stories of hundreds of wartime Japanese Americans. After the video has been created, visitors will be able to email themselves a link to their documentary to share with their friends and family. 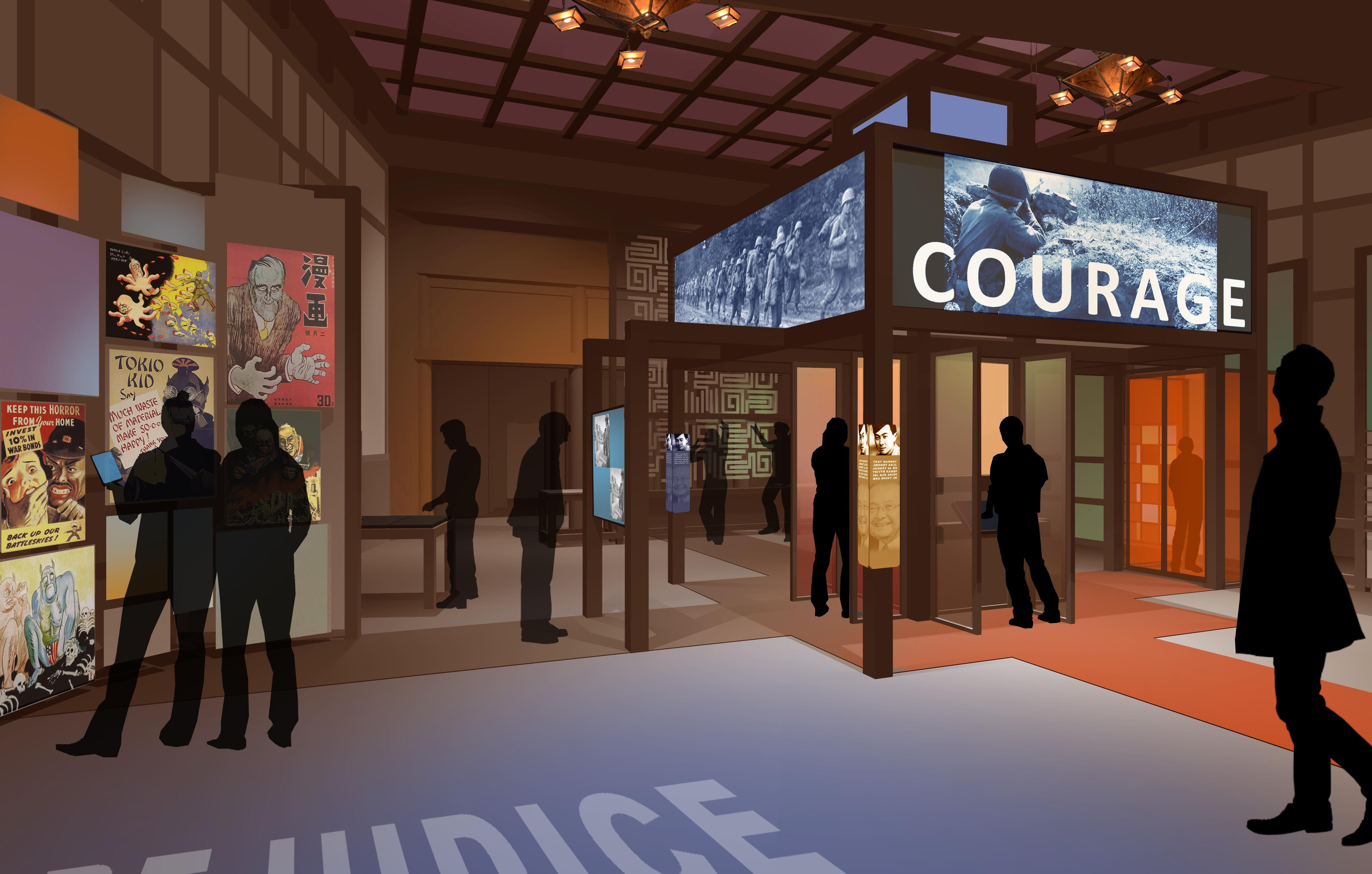 Woven Thoughts:
The political and social climate during World War II is quite relevant today.  Woven Thoughts provides visitors with an opportunity to weigh in on contemporary issues. Participants will cast their vote in response to a question by selecting a piece of fabric and weaving it into a wire grid. These different colored ribbons will form a mosaic that provides a visual representation of public sentiment.

Courage:
The Nisei soldiers, members of the 100th Infantry Battalion, 442nd Regimental Combat Team, and the Military Intelligence Service (MIS), served heroically in Europe and the Pacific. The 100th/442nd remains the most highly decorated unit in US military history for its size and length of service, and the MIS was credited with shortening the war by two years.
World War II stories often focus on the battlefield.  However, courage is manifested in many ways, and some of the most important can happen anywhere, and at any time, including finding courage:

Passing the Torch:
Defining Courage closes with a selection of quotes from the Japanese American soldiers ‘passing the torch’ on to the next generation.  These quotes are taken from GFBNEC’s Hanashi oral history collection.  The Japanese American veteran experience is a story of resilience, courage and a firm belief in the rights and responsibilities of citizenship.

Defining Courage provides an opportunity for visitors to experience the results of fear mongering and discrimination and reminds us that as Americans, we are all citizens.  Through the stories of the Japanese American soldiers of World War II, visitors learn how to act with similar courage in their own lives.

About Go For Broke National Education Center (GFBNEC)
Since its formation in 1989, Go For Broke National Education Center has been committed to educating the public about the responsibilities, challenges, and rights of American citizenship by using the life stories of the Japanese American soldiers of World War II. In order to share these stories, they began video recording the oral histories of Japanese American veterans, and today they have the largest collection of its kind in the country. The interviews have been incorporated into a complete curriculum with lesson plans and web-based project learning to share their story with youth across the country.