GOT premiered March 31st with the latest trio of beer paying homage to House Targaryen!  Fire and Blood is inspired by Daenerys Targaryen mother of three dragons.  Drogon, Rhaegal and Viserion have their own unique label to celebrate the rebirth of dragons the ultimate hunters!   Happily we can enjoy a taste of Brewery Omme Gang’s GOT Beers on April 17th at Steingarten L.A. and maybe even grab a free commemorative glass!    As much as I love Daenerys for her passion to free the slaves I’m a Stark to the bone so will be figuring out the PERFECT geek outfit to show my loyalty!  All I can say is that I better not see a Lannister or I might go Arya Stark on somebody’s ass with my Tickler!!! Just kidding I don’t have the Hound to back me up!

What would you wear to drink the GOT Brew?  Leave a comment below … 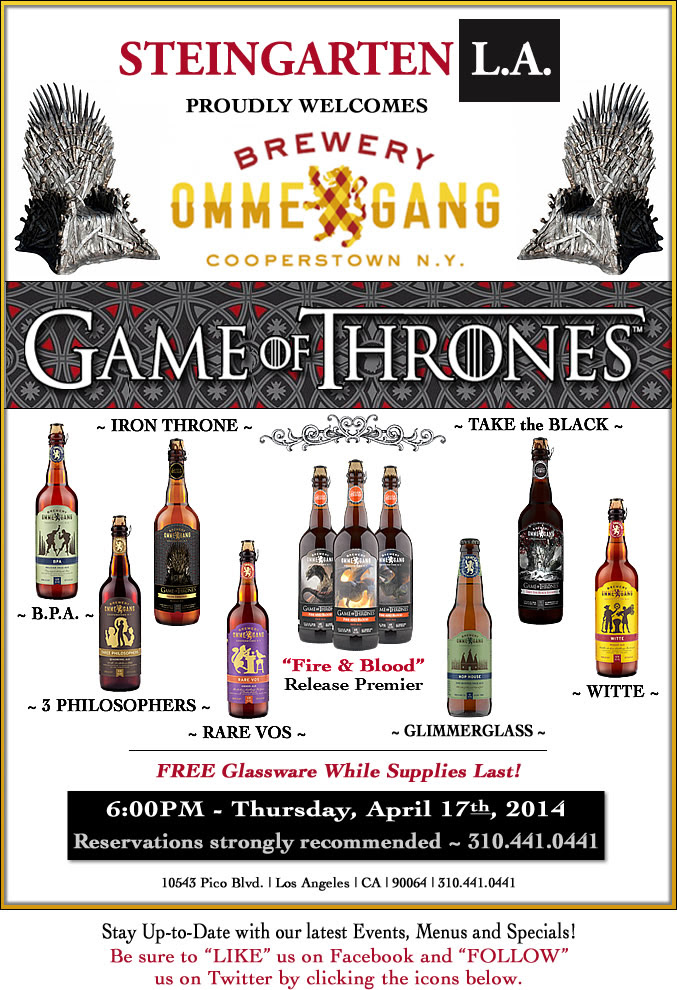 Ommegang and HBO® announce the newest beer in the Game of Thrones® collaboration series.

Ommegang and HBO® announce the newest beer in the Game of Thrones® collaboration series. Through its first three seasons, the critically acclaimed drama has become the biggest show on HBO.

Named after the motto of House Targaryen, Fire and Blood is inspired by Daenerys Targaryen and her three dragons, Drogon, Rhaegal and Viserion. To celebrate the rebirth of dragons, three different labels were created by the Game of Thrones visual effects specialists, each depicting one of Daenerys’ feared dragons. Randomly distributed amongst the cases, each case will contain all three bottles.

On sale March 31, in time for the debut of Season 4, Fire and Blood makes for the perfect season premiere pairing. The beer is available in 750ml bottles and 1/6 barrel kegs.