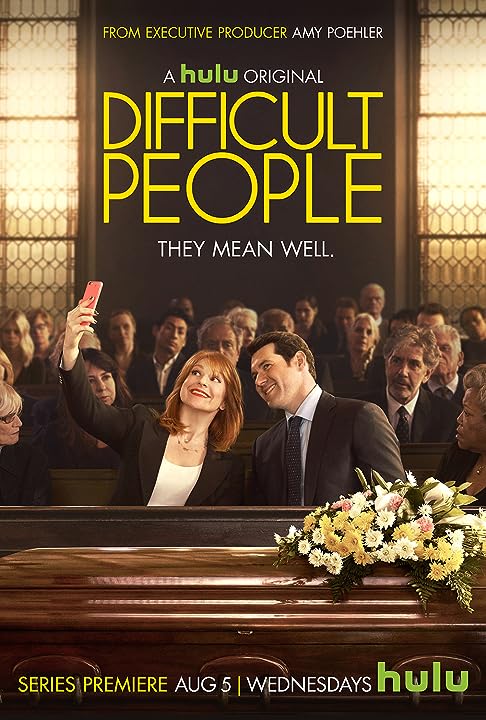 I can’t deny the illicit delight from my secret love of Hulu’s Difficult People a series about nothing but unpleasant dysfunctional people in NYC. I’m very excited that it’s been added to the 2016 Paleyfest LA with Julie Klausner, Billy Eichner, Andrea Martin, James Urbaniak, Cole Escola, Scott King attending to discuss the series. It’s the modern Seinfeld that I didn’t realize I wanted to see until I was seduced from the very fist episode. I mean really who doesn’t want to eat after a funeral??? Such a fun show for the inner meanie in us all! So binge on Difficult People an original comedy on  Hulu and  join me at the PaleyFest LA for the panel on 3/18 tickets are available on Ticketmaster.

The Hulu series follows two bitter failed comics Julie Kessler (Julia Klausner) and Billy Epstein (Billy Eichner) as the see other ‘lesser talented’ people make it as they get older. Julie lives with her boyfriend Arthur Tack (James Urbaniak) who works at PBS and Billy works at a cafe owned by Nate (Derrick Baskin) and Denise (Gabourey Sidibe). Matthew (Cole Escolar) is Denise’s pretend son/best friend is a waiter who’s getting lucky breaks because he’s young, cute and funny. Julia’s mother a successful psychiatrist Marilyn Kessler (Andrea Martin) is the foundation of her esteem issues with little cuts of verbal disapproval aka looking for a hanger (Mommy Dearest). Each episode is self sabotage on why they didn’t and haven’t made it with making enemies left and right because they are unpleasant as hell!