You can celebrate with Nichelle Nichol’s 85th Birthday on December 28th with family and friends. The celebration will be at La Piazza Restaurant at the Grove in West Hollywood. The VIP Fan Packages include Birthday Dinner, Photo-Ops, Autographs and a Meet & Greet.

What can you give the woman who’s meant so much to fans all over the world? Where you can wish her a ‘happy birthday’ in person! Ms. Nichol is a trailblazer who played ‘Uhura‘ a role beloved to millions all around the world on Star Trek. Her role was the first to be on network TV where a woman of color wasn’t a housewife, maid or secretary instead she played an officer exploring the universe. Normally her birthday celebration is just with family and close friends tub this year she’s giving 35 fans an opportunity to attend this milestone birthday celebration in the hear of West Hollywood. VIP packages which include dinner, birthday cake, and a champagne toast, plus a Meet & Greet, autographs, and photos with the birthday girl, are available to ultimate fans.  The birthday dinner party will be held at La Piazza Restaurant at The Grove in Los Angeles, announced Gilbert Bell, of GB Entertainment, Ms. Nichols’ manager. 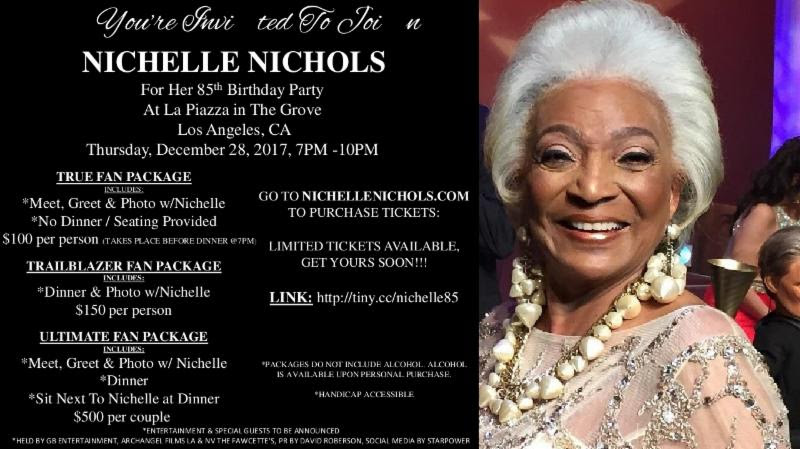 “Nichelle Nichols has a special relationship with her fans, one of mutual admiration and respect.  Many of them stop by every year to say hi when she’s in their town at an event or convention.  I knew that for her 85th Birthday, we wanted to do something fun and special for Nichelle and her fans, and the idea for the VIP Fan Meet & Greet packages, which includes dinner at her birthday party, sounded like a unique way to include some lucky fans in the celebration,” said Bell.
Special guests and entertainment to be announced. To stay up to date, and for details and tickets: http://www.nichellenichols.com/store/nichelle-nichols-85th-birthday-celebration
What:
Nichelle Nichols’ 85th Birthday Party & Dinner
Where:
At La Piazza in The Grove Los Angeles, CA
When:
Thursday, December 28, 2017, 7PM -10PM
TRUE FAN PACKAGE INCLUDES:
*Meet & Greet and Photo w/Nichelle *No Dinner / Seating Provided $100 per person
(TAKES PLACE BEFORE DINNER @7PM)
TRAILBLAZER FAN PACKAGE INCLUDES:
*Dinner, Meet & Greet, and Photo w/Nichelle $150 per person
ULTIMATE FAN PACKAGE INCLUDES:
*Meet & Greet, and Photo w/ Nichelle *Dinner *Sit Next to Nichelle at Dinner $500 per couple
GO TO NICHELLENICHOLS.COM TO PURCHASE TICKETS:
LIMITED TICKETS AVAILABLE, GET YOURS SOON!!!
LINK: http://tiny.cc/nichelle85

###
https://www.facebook.com/OfficialNichelleNichols/
https://twitter.com/NichelleIsUhura
About Nichelle Nichols
Nichelle Nichols is an American actress and singer. As Lieutenant Uhura on the legendary television series Star Trek, Nichols played, in the words of Dr. Martin Luther King, “the first non-stereotypical role portrayed by a black woman in television history.” Nichols also began volunteering her time with NASA, in a highly effective campaign to recruit minority and female personnel for the space agency. She has continued to appear in various television and film roles, and continued her charitable missions.