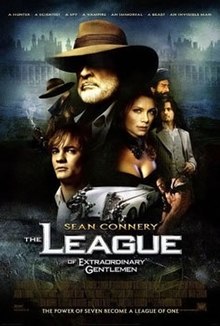 Remember that movie that came out about a little over ten years ago with Sean Connery? You know his very last film before he retired? The action fantasy cowboy movie? Likely not since it was trashed by everyone well they are showing it on Encore so I thought i’d listen to it while checking emails. I knew it was a bad movie undeserving of my full attention. Well it’s not that awful. Really it’s OK since Sean committed to his role as Quatermain and made it a fun silly romp. You have to suspend belief as a film that feature characters from classic literature being turned into action heroes. Sort of a old school Avenger Assemble time but with a adventurer, seaship captain/pirated, Jekyll/Hyde, Dorian Gray, a vampire AND a grown up Tom Sawyer (with unfortunate blonde hair). I thought visually it looked ok with the Victorian England redone with a Steampunk sideye but the cast didn’t really gel despite everyone being good actors the script wasn’t quite funny (tongue in cheek) or serious enough. I find it’s often very difficult to have a film that is neither comedy or serious and that (I think) is why people didn’t respond to it. As much as I LOVE Sean Connery this wasn’t the best final film for him (it’s OK but …) since it had such a large cast with character some people may not ‘know’ they weren’t able to really invest the backstory for all the characters and create an emotional connection with the team. Instead it was the Quatermain show and everyone else was on his coattails. But when you have an ensemble film everyone needs to not only have a ‘moment’ but also the ability to take a somewhat dull script and make it come alive. I’ve seen the cast over years and think they are all solid actors but in this film the director wasn’t able to work with their ability to create a fun comic book movie. Of course when you look at this film you have to remember it was released over ten years ago before the ‘Era of Comic Book’ movies so they likely didn’t know how to make this film work. I also think that some studios work better with fantasy scripts than others.

I wouldn’t recommend going out of your way to see this film but if it’s on your cable or movie channel it’s a nice movie for older kids and adults who want to turn their brains off.

The League of Extraordinary Gentlemen, also promoted as LXG, is a

The League of Extraordinary Gentlemen. The film stars Sean Connery, who plays Allan Quatermain, and features Captain Nemo, Mina Harker, Rodney Skinner aka An Invisible Man (the rights could not be secured to The Invisible Man), Dr. Jekyll and Edward Hyde, Dorian Gray, and U.S. Secret Service agent Tom Sawyer (Gray and Sawyer were not in the comics, although a painting of a young man holding a cane with “Dorian Gray” printed under it appears on the cover of Volume I.