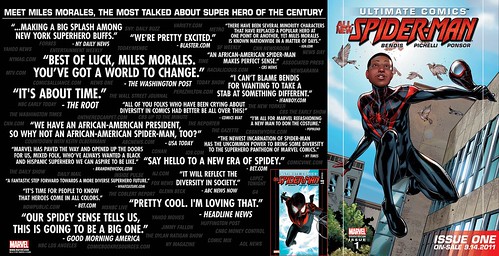 In promoting the new Ultimate Spider-Man comic, which features a black Latino protagonist in Miles Morales, Marvel pulled out the kind of pull-quote driven advert you’d expect for a high-profile launch.

Unfortunately, the ad short-changes what proves to be a compelling, if not particularly exciting, story.

As seen above, the ad uses the first sentence in this story from ComicsBeat, which opens, “All of you folks who have been crying about diversity in comics had better be all over this!” 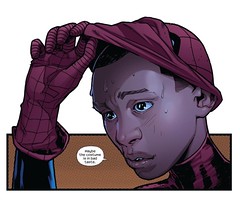 While the rest of the story is played straight, for Marvel to validate such blatant Othering of progressive comics fans – characterizing calls for diversity as “crying;” the Tropic Thunder-esque use of “you folks,” and the ransom-note language (“you had better be all over this!”) – is a questionable choice. Particularly since The Beat’s Editor-In-Chief, Heidi McDonald, has written more sensibly about Miles in other posts:

That panel of Miles demasking was everywhere yesterday. And the more I saw it, the more I loved it. It’s iconic (I wish the dialog were a little more iconic but so be it.) It’s a beautiful drawing full of character that draws me in. It reminds me a little of Velazquez’s portrait of Juan de Pareja, which is surely too high praise as that painting is one of the greatest of all times, but they share that sense of humanity which informs the best art.

Moving on to the story itself, McDonald’s critique of the artwork still holds up in USM #1. The tandem of Sara Pichelli (pencils) and Justin Ponsor (colors) shines best in the story’s city settings. Their Brooklyn looks lived in, and authentically, refreshingly diverse. This should be the norm by now, of course, but … well, you know. Comics.

Set before Miles’ first appearance in Ultimate Fallout #4, Bendis spends USM #1 showing us how Miles got his powers, in an accident not unlike the one that granted Peter his abilities, and introducing us to his family. While it’s never said outright, it’s strongly suggested that Miles’ parents are having trouble making ends meet, a feeling that comes out most heavily in a sequence where the Morales clan attends the lottery for entry into a charter school.

“It shouldn’t — all these other kids,” Miles says. “Should it be like this?” This show of empathy helps ground Miles for the readers at a crucial moment. He revisits these emotions later on, while visiting his uncle Aaron, something Miles’ dad doesn’t like – especially after Miles faints after his fateful accident, the consequences of which start to dawn on him as the story closes.

This kind of decompressed story – or “writing for the trade,” as fans often call it – might disappoint some of the new readers Bendis and Marvel want to hook with the new USM; after all, for a book selling for $3.99, it’s not unreasonable to suggest that after all the hype, it would have been nice to see Miles out “learning on the job” like we saw him doing in Ultimate Fallout.

But at this point, USM #1 accomplished what Bendis and company set out to do – show us a young hero worth getting invested in. The key now is to follow up: not just in the key details about Miles’ regular life (what are Miles’ parents’ names? What’s going on that has them so worried about their living situation?) but about the touches that will eventually make Miles his own Spider-Man; the tagline for the next issue, “Who Is Miles Morales?,” could hardly be more apropos.