The first moment I saw this poster out of the corner of my eye I was intrigued.  A black woman dressed in such formal and expensive clothing for that time of history I’ve never seen such a movie poster!  I didn’t know much about the movie but I said to myself I’m going to see this movie so I went home and looked up the movie.  You can’t imagine my excitement to learn this little known (to me) story of how England started to emancipate slavery.   How a man falling in love and having a relationship with a black woman would come to influence the course of British History and slavery.   I saw the film and was beyond impressed with the story, cast and direction.  I uploaded a review of the film on my youtube channel CherryLosAngeles  new period drama Belle.   As well as the Q&A with two cast members at the Arclight in Hollywood.

I know that some might immediately dismiss this as a ‘black movie’ or a ‘slave movie’ ie depressing downer but it’s a film about the human state of being.  About being a woman, about being black in a society where you are the minority (really the only one in Belle’s case) and someone who grows into a woman who decides to follow her own path.  I know it’s a period drama with corsets, men in short pants and the live of the gentry (titled rich) but it’s so much more directed by a woman who made the subject so relatable to us trying to live a life true to our own moral compass.

This film is inspired by the true story of Dido Elizabeth Belle, the illegitimate mixed race daughter of Admiral Sir John Lindsay. Raised by her aristocratic great-uncle Lord Mansfield and his wife, Belle’s lineage affords her certain privileges, yet her status prevents her from the traditions of noble social standing. While her cousin Elizabeth chases suitors for marriage, Belle is left on the sidelines wondering if she will ever find love. After meeting an idealistic young vicar’s son bent on changing society, he and Belle help shape Lord Mansfield’s role as Lord Chief Justice to end slavery in England. 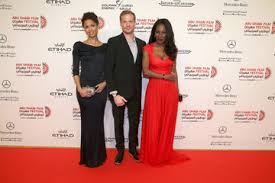