If you’re a fan of the British Import Downtown Abbey and have been wanting to live our your gentry fantasy but unable to afford the flight to the UK.   Well your dreams have come true with this exhibit at the Winterthur Museum, Garden and Library in Wilmington, Delaware.   It’s recommended you buy your tickets in advance since fans will be coming from far and wide to see the costumes up close and will likely sell out on weekends/holidays and popular times. 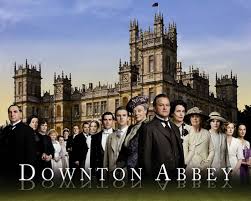 Costumes of Downton Abbey is an original exhibition of exquisite designs from the award-winning television series. Approximately 40 historically inspired costumes from the television show will be displayed and supplemented by photographs and vignettes inspired by the fictional program and by real life at Winterthur.

Costumes of Downton Abbey is an original exhibition of exquisite designs from the award-winning television series. Forty historically inspired costumes from the television show will be displayed and supplemented by photographs and vignettes inspired by the fictional program and by real life at Winterthur.
Visitors will have a chance to step into and experience the world of Downton Abbey® and the contrasting world of Winterthur founder Henry Francis du Pont and his contemporaries in the first half of the 20th century.

In addition, Winterthur will host a wide range of lectures, workshops, and exciting events for adults and families focusing on entertaining and country house life in Britain and the United States.

A co-production of Carnival Films and Masterpiece, Downton Abbey depicts life in an aristocratic household of the fictional Earl and Countess of Grantham and is one of the most popular and critically acclaimed period dramas ever produced. It has won a Golden Globe Award for Best Miniseries and seven Emmys including a Primetime Emmy Award for Outstanding Miniseries. It was the most watched television series in both the UK and the U.S. and became the most successful British costume drama series since the 1981 television serial Brideshead Revisited. By the third series, it had become one of the most widely watched television shows in the world. The Guinness World Records recognized Downton Abbey as the most critically acclaimed English-language television series of 2011.

The costumes will be lent by Cosprop, the world’s leading costumier to film, television, and theater. Winterthur’s most popular exhibition, Fashion in Film, which attracted more than 42,000 people over its three-month run, also featured costumes by Cosprop.

*Advance purchase of tickets is strongly recommended. Timed tickets are required for this exhibition. Included with general admission. Members free.

For more information on visiting Winterthur during Costumes of Downton Abbey, including tips for enhancing your visit and Members-only access and information, click here.

For information on Members-only programs and events related to Costumes of Downton Abbey, please visit the Member activities page.

The exhibition at Winterthur is presented by

With support from the Glenmede Trust Company
Downton® and Downton Abbey®. A Carnival Films/Masterpiece Co-Production.