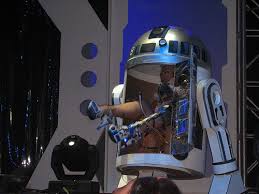 I’m not a Coachella outdoor tent type of chick I’m more of a Geek indoor mall shopping go see movies and crossfit workout chick so I have to say I’m appreciating this weekend in Los Angeles. I might FINALLY see my first burlesque show (something on my ‘no real interest’ list) because of my Star Wars Love.  I mean really I can’t resist the idea of my R2D2, Chewbacca and Tie Fighter ships.  I’m on pins and needles wondering what costumes ideas I’m going to use for my Course of the Force Sexy Costume before heading down to San Diego for the 2013 Comic Con!  Hmmm should I try to drag my boyfriend to this

fun night??? He doesn’t seem to like Science Fiction and is indifferent to Star Wars (EEEKKK i’m dating a non-geek .. is up down?? is the sun going to turn blue and am I losing my NUMBER 1 rule for the perfect man????)  but he likes boobs so this might be a way to get him interested .. bwa ha ha (I’m SOOO sneaky and plan to convert him before 2013 SDCC).  I’ll check out the crazy art on Saturday and get my geek culture in for a fun filled weekend.  But how will I squeeze in a movie marathon to catch up with GI Joe 2 and get my scare on with Evil Dead???? Hmmm I’ll figure out something!

Hear what you’ll be missing next week as Coachella performers join Black Crystal Wolf Kids to cover the festival hits.

James Kochalka is a comic book artist, musician, and more hailing from Burlington, Vermont. His well known works include a new animated cartoon called Superfuckers. Matt Furie is well known for his illustrative character works, at times featuring super heroes and villains in a world that’s all his own. Mark Todd is an illustrator and instructor at Art Center College of Design. His works are often amalgamations of layers that often comprise his own takes on classic comics covers.

All three artists are involved in some type of published work, some of which will be available at Giant Robot.

For any other information on or about any of the artists or anything else contact Eric Nakamura at Giant Robot.