Hasbro is bringing the TOYS to SDCC 2017

I’m so excited to see what Hasbro is bringing to San Diego Comic Con with TRANSFORMERS, MY LITTLE PONY, HANAZUKI, G.I. JOE, DROPMIX, WIZARDS OF THE COAST, Disney’s Tangled The Series, Descendant 2, STAR WARS, MARVEL and so much more! It’s fun for fans of all ages who’ve grown up loving all things Hasbro, kids and GRANDKIDS!

It’s going to be days of fun at the Hasbro booth (#3213) and all around the convention center with fun Hasbro experiences for all. You can keep up to date at Hasbro’s information booth each day for updates and follow @HasbroNews on Twitter and @Hasbro on Instagram for the latest happenings

within the booth. Highlights include a giant eight-foot tall statue of Songbird Serenade from the new ‘My Little Pony: the Movie’ and makeup artists will get you groomed with Cutie Marks and ‘Ponified’ hair & nails! Fans can look forward to a Transformers team Q&A session and a poster giveaway for Transformers: Generations. Following San Diego Comic Con, a limited number of each item will be available on HasbroToyShop.com.

The following highlights some of the activities for Hasbro’s brands and licensed properties happening within the Hasbro booth (#3213) and around the convention. San Diego Comic Con attendees are encouraged to check the schedule posted in Hasbro’s information booth each day for updates and follow @HasbroNews on Twitter and @Hasbro on Instagram for the latest happenings within the booth.

The TRANSFORMERS panel, held 11:00am-12:00pm on Thursday, July 20th, will get the collectors excited as the team provides an exclusive glimpse of the latest and greatest toys that have yet to hit shelves from the TRANSFORMERS: GENERATIONS POWER OF THE PRIMES product line. Fans will also be able to go behind the scenes of the TRANSFORMERS: THE LAST KNIGHT film line, as well as the movie Masterpiece Collection. In addition, members of the TRANSFORMERS team will host a Q&A session to answer some of your burning questions.

Other exciting TRANSFORMERS brand booth activities include a poster giveaway for TRANSFORMERS: GENERATIONS, along with a glimpse at upcoming products across the TRANSFORMERS portfolio.

The MY LITTLE PONY brand is returning to Comic-Con this year with extra special activities for everypony as Hasbro anticipates the exciting premiere of MY LITTLE PONY: THE MOVIE, which will be released by Lionsgate on October 6th. Making her premiere at the Hasbro booth will be a dazzling eight-foot tall statue of Songbird Serenade; fans can get up close to the new character, voiced by singer-songwriter Sia in MY LITTLE PONY: THE MOVIE. Fans can also dive into Seaquestria with a one-of-a-kind photo opportunity or get “Ponified” at the Hasbro booth at special “Ponification Stations” where make-up artists will apply Cutie Marks and “ponified” hair and nails for fans of all ages.

The MY LITTLE PONY panel on Friday at 10:30 a.m. will feature the cast and creatives behind MY LITTLE PONY: THE MOVIE and will include a sneak peek at the upcoming film followed by a Q&A. Word around Equestria is that there may be a surprise guest! After the panel, fans can meet the MY LITTLE PONY: FRIENDSHIP IS MAGIC voice talent for an autograph signing in the Hasbro booth.

This year, MAGIC: THE GATHERING fans will be treated to a series of high profile autograph sessions at the Hasbro Booth with game designer James Wyatt at 4:00 p.m. on Thursday, head designer Mark Rosewater at 10:00 a.m. and artist Tyler Jacobson at 2:00 p.m. on Friday, and artist Brandon Holt at 11:00 a.m. on Saturday. Holt illustrated the screen print of Nicol Bolas, produced in collaboration with Mondo and part of the brand’s Comic-Con exclusive 2017 Planeswalker Pack. The exclusive also includes six Planeswalker cards with artwork from Vincent Proce. The set will retail for $180 and is available at the Hasbro Toy Shop.

Rosewater will also appear at a one-man panel on Saturday at 6:30 p.m. in Room 25ABC in which he re-creates his popular blog about MAGIC: THE GATHERING, “Blogatog,” and participates in an audience Q&A.

and Villains from the MARVEL Universe. On Saturday, July 22nd from 5:00pm-6:00pm, Hasbro and MARVEL will discuss exciting news around Hasbro’s popular MARVEL Legends lineup. Attendees will also get a sneak peek at upcoming MARVEL action figures, followed by a Q&A.

STAR WARS
Hasbro will share its latest STAR WARS news from a galaxy far, far away with fans from 1:00pm-2:00pm on Friday, July 21st, providing an in-depth look at Hasbro’s latest action figure offerings and several fun surprises including a special product reveal. The Hasbro STAR WARS team and designers will also host a Q&A with fans in the audience following the presentation to address the latest product news.

At the Hasbro booth, fans can partake in daily Lightsaber Training, show off their best Star Wars cosplay at the STAR WARS Costume Showcase and will also have the chance to get their hands on a poster giveaway (while supplies last) only available at the Hasbro booth in collaboration with diorama artist Stephen Hayford. 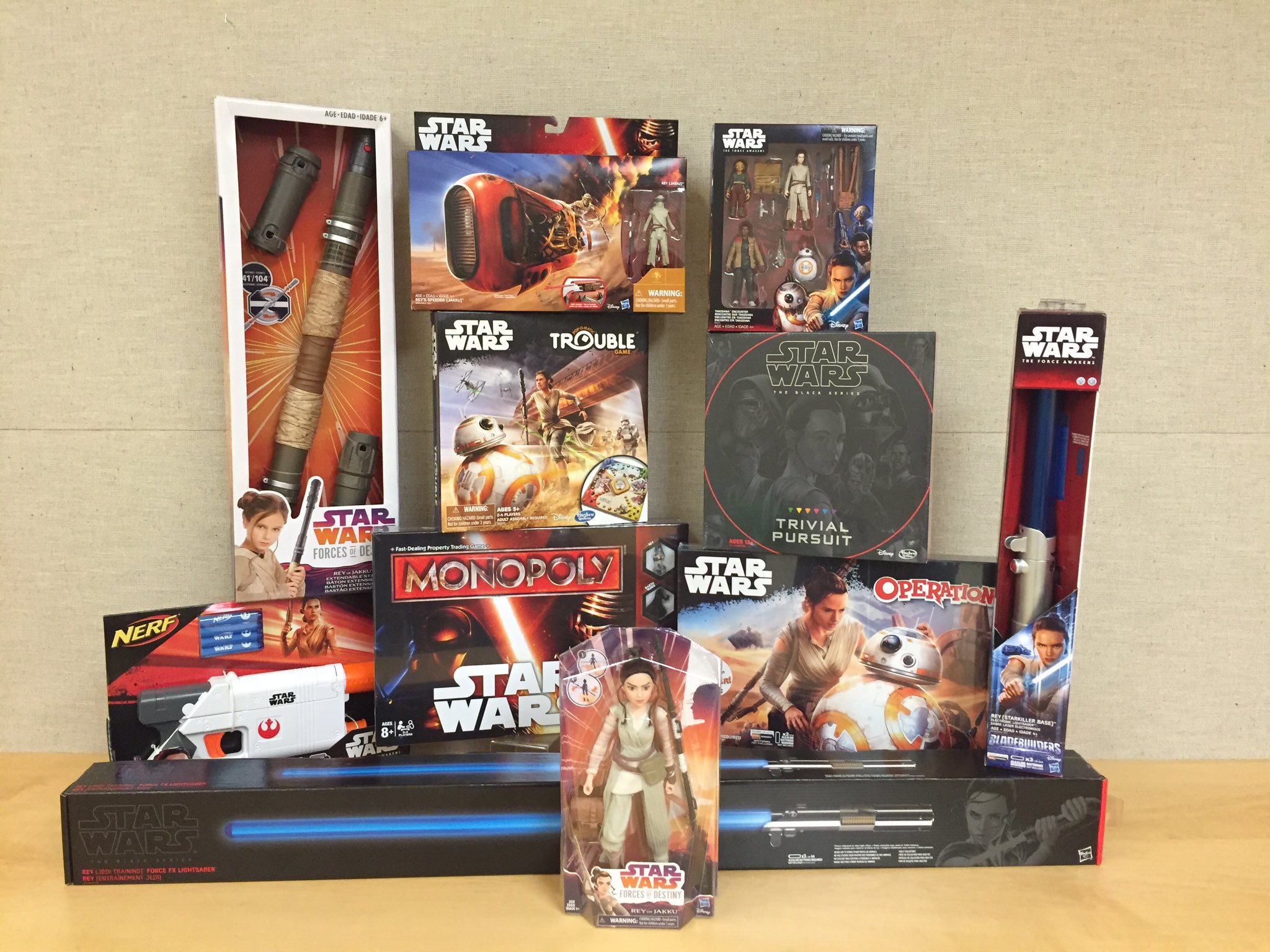 About Hasbro
Hasbro (NASDAQ: HAS) is a global play and entertainment company committed to Creating the World’s Best Play Experiences. From toys and games to television, movies, digital gaming and consumer products, Hasbro offers a variety of ways for audiences to experience its iconic brands, including NERF, MY LITTLE PONY, TRANSFORMERS, PLAY-DOH, MONOPOLY, LITTLEST PET SHOP and MAGIC: THE GATHERING, as well as premier partner brands. The Company’s Hasbro Studios and its film label, Allspark Pictures, are building its brands globally through great storytelling and content on all screens. Through its commitment to corporate social responsibility and philanthropy, Hasbro is helping to make the world a better place for children and their families. Hasbro ranked No. 1 on the 2017 100 Best Corporate Citizens list by CR Magazine, and has been named one of the World’s Most Ethical Companies® by Ethisphere Institutefor the past six years. Learn more at www.hasbro.com, and follow us on Twitter (@Hasbro & @HasbroNews) and Instagram (@Hasbro).

STAR WARS and related properties are trademarks and/or copyrights, in the United States and other countries, of Lucasfilm Ltd. and/or its affiliates. © & TM Lucasfilm Ltd.

Marvel Entertainment, LLC, a wholly-owned subsidiary of The Walt Disney Company, is one of the world’s most prominent character-based entertainment companies, built on a proven library of more than 8,000 characters featured in a variety of media over seventy-five years. Marvel utilizes its character franchises in entertainment, licensing and publishing. For more information visit marvel.com. © 2017 MARVEL