Have you ever wanted to be on Broadway?  If you can get to Los Angeles this Saturday (February 8th) you can try out for the Broadway and upcoming North American touring production of Newsies!  Well you do have to be a guy but that’s the only thing standing in your way … oh and the ability to sing, dance and act (of course) so all that and more means I won’t be trying out this Saturday! 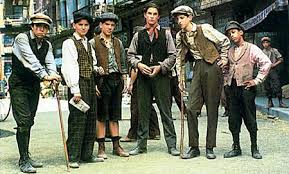 You may have thought the Newsies started out as a film starring Christian Bale back in the 90’s but it was inspired by the true life story of Kid Blink a newsboy who fought the ‘power’ back in 1899 with a Newsboy strike against the newspaper Baron’s Pulitzer, Hearst and others who had orphans working in terrible conditions.   The film was such a cult hit after being released on DVD that it was the single most requested title of all Disney musical’s that wasn’t a stage show (musical play).

Now the important details for the Disney Theatrical Production’s open call audition for male dancers who are 16 – 22 years old of ALL ethnicity that can tap and sing that are Equity and non-Equity.  You can tryout on Saturday, February 8, 2014, starting at 11am at the Hollywood United Methodist Church (6817 Franklin Avenue/Los Angeles, CA 90068).  All dancers should bring sneakers, tap shoes, kneepads and a photo/resume.  Lou Castro (Associate Choreographer for Newsies) who has worked on the Broadway productions of Women on the Verge, 13, and Sunday in the Park with George is conducting the audition.  It’s first come first seen so make sure you come early and READY to dance!

I’m sure that competition will be fierce with all of the talent in Los Angeles but how often do you get the chance to audition for BROADWAY????  So calling all boys come to HOLLYWOOD!!!

Sign in begins promptly at 10:00am in Grant Hall.

Enter through the gate on Hillcrest Road east of the church’s main entrance.

Parking is available at the Hollywood/Highlands Parking Structure.

As previously announced, the Newsies North American tour will play The Pantages Theatre in Los Angeles from March 24 – April 19, 2015. For information or to register for advance ticket access notifications, visit NewsiesTheMusical.com/Tour, Facebook.com/Newsies and Twitter.com/Newsies.