If you can buy just ONE item what would it be???  You know me I’m always all about Star Wars!!!

Maddalena, is proud to announce

the highlights from the upcoming Hollywood auction this December 21st, details are below.

Frodo’s “Sting” hand-crafted aluminum sword from the Lord of the Rings Trilogy. Sting was an ancient blade made by Elvish weapon-smiths used by lead character Frodo Baggins in Tolkien’s epic The Lord of the Rings.This is one of the production made Sting swords beautifully crafted with resin hilt and hand-etched aluminum blade by WETA Workshop. As Tolkien described in the book, Sting is depicted as vaguely leaf-shaped, with gently curving edges. Engraved on the blade are Sindarin letters that read phonetically, “Maegnas aen estar nin dagnir in yngyl im.” Translated they read, “Sting is my name; I am the spider’s bane” The sword has a WETA logo, reference number, date and “Sting (Human Scale)” engraved into it. Lord of the Rings items are extremely rare and just for a point of referenc

Bert Lehr’s Cowardly Lion, “Witch Remover” prop from The Wizard of Oz. This instantly recognizable prop is wielded by the Cowardly Lion as he, Dorothy, the Tin Man and the Scarecrow enter the Haunted Forest and read the sign aloud stating, “Haunted Forest…Witches Castle one mile…I’d turn back if I were you.” So visually important is this scene that M-G-M chose the image of this sequence for one of their eight promotional lobby cards. estimated to sell for $100,000 – $150,000. 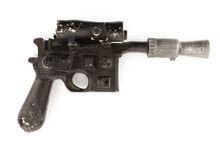 The Empire Strikes Back and Return of the Jedi. The space-scoundrel-turned hero’s persona is irrevocably tied to his blaster pistol. Solo was modeled after the rogue gunslingers of the westerns that influenced creator George Lucas. This non-firing blaster was created for The Empire Strikes Back and was also used in Return of the Jedi. It would have been used in the majority of scenes that feature Han, with the heavier, live-fire weapon being used for close-up shots. Particularly noteworthy scenes requiring this lighter version are when Darth Vader uses the Force to lasso the blaster out of Han’s hand in Empire, and in Jedi when Han wrestles with a Stormtrooper to regain possession of his blaster during the Rebels’ encounter with Imperial forces on Endor. It is the only known example of this type of blaster in private hands. It is estimated to sell for $200,000 – $300,000.